Congratulations on being picked to be the Czar for Climate in President-elect Biden’s administration. I heard you speak about your role on a couple of different news shows and am pleased to note that you recognize the shortcomings of the Paris Agreement.

The only effective solution that scientists like James Hansen are telling us to embrace, is nuclear power. Nuclear power is the one source of clean energy that is scalable to the levels needed. It is also the has safest record (fewest fatalities per TWh generated) and the smallest environmental footprint, both in terms of area covered and tonnage of commodity materials required per unit of electricity delivered. Yet, our current policies such as subsidies and portfolio standards, and the manner in which electricity is marketed is making nuclear power uncompetitive. The unfounded fear of radiation and years of anti-nuclear misinformation has placed such strict and expensive standards on the nuclear power plants that they are being priced out. In many states even fully functioning nuclear power plants are being shuttered. We have a shortfall of clean electricity, and we are digging ourselves deeper in the hole!

As climate Czar, I hope you will address the market distortions that are at the root of the nuclear power plant closures. Instead of closing them down, we should be extending clean energy credits to them, support their expansion, and invest in demonstration of newer walk-away safe nuclear power plant designs.

Getting the public to embrace nuclear power presents a formidable challenge. Public opposition to nuclear power has its origin in the debunked idea that there is no safe dosage of radiation, and the improper application of the LNT (linear, no threshold) hypothesis to estimate cancer in large populations exposed to low levels of radiation. Without public acceptance of nuclear power, we have no chance to achieving net-zero emissions by 2050 or curbing the devastating effects of climate change. What is urgently needed is a sustained public education and outreach program that undoes the decades of anti-nuclear fear mongering. An office of energy education and public outreach dispelling the fear of nuclear power. There are trade-offs with all energy systems, but the benefits from nuclear power far outweigh the risks.

Good luck to you in your new role!

I am often reminded by my friends that renewable power like wind and solar are making tremendous strides—their deployment is rising exponentially, and costs are coming down. As a result, my friends claim, greenhouse gas emissions in the US are declining. They note that renewable sources are a cheaper alternative than coal power in many parts of the world. We should therefore close down the coal plants and replace them with wind and solar farms. For backup these installations should use batteries, whose costs, I am told, are also plummeting. Indeed, Mr. Bloomberg has pledged $500 million to hasten such a transition.

I wish I could share their positive outlook. Deployment of renewable power technologies has been increasing, but even after twenty years of this exponential growth, in 2018 they provided a mere 3% of global energy, while fossil fuels accounted for over 80%. Wind and solar simply do not scale. Here’s a graphic from the BP Statistical Review of World Energy, 2019. It shows the global primary energy consumption various sources in MTOE, metric tons of oil equivalent. Yes, you can see the increase in renewables, but the even larger increases in consumption of fossil fuels has led to emission of ever-increasing amounts of carbon dioxide. 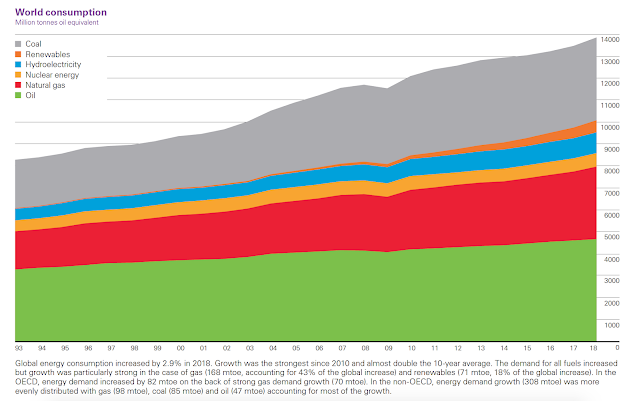 There has indeed been a decline in the CO2 emissions in the US electricity sector. This decline, though, is largely a result of switching from coal to natural gas, and not due to the rise renewables. Wind and solar contributed only a small fraction. Here are the data from the US Department of Energy’s Energy Information Administration that illustrate the point. 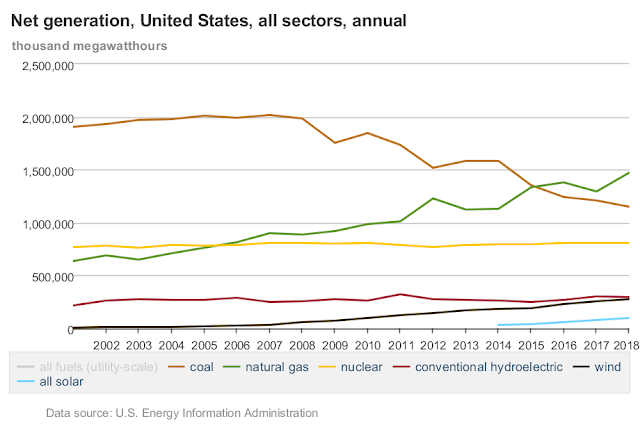 The falling price of wind and solar power that the proponents point too does not reflect their true costs.  Policies such as Renewable Portfolio Standards, subsidies, and alternate revenue streams such as curtailment allowances hide the costs. Wind and solar installations must come with the disclaimer, “Batteries Not Included.” If one includes the cost of storage and other systems for managing their intermittency, the cost of wind and solar would be considerably higher.

Consider closing a 1-GW coal power plant, say the Bruce Mansfield in Pennsylvania, and replacing it with renewables. First, to get the same number of GWh of electricity over a year, you will have to install about 3 GW of wind or solar facilities to account for their reduced capacity factors. Installation costs are often reported in $/W, and so for starters we have allow for the higher installed capacity to get the same amount energy.

Next, you will also have to provide some storage to cover for days that wind might not blow or the clouds obscure the sun. Currently, natural gas plants are used to provide backup power because natural gas in cheap—thanks to fracking—and they can ramp up quickly. But natural gas is a fossil fuel, and we do not want that; instead we want to put in batteries for backup. If we choose to provide storage for just 100 hours, a tad over four days; that would mean installing battery storage capacity of 100 GWh. How much lithium would that require? According to Tahil, theoretically you could store 1 kWh of energy from 73 g Li in lithium ion batteries. Note that g/kWh are the same as Tons/GWh. Thus, theoretically, you would need 73 Tons for storing 1 GWh of electrical energy.

In practice, the amount required is often 3 to 4 times higher because of several factors: discharge rate, irreversible losses, reaction kinetics, etc. Tahil discusses these issues in the paper and concludes by suggesting a requirement of 320 g Li per kWh of storage. In other words, shutting down just a 1-GW coal plant and replacing it with renewables and providing only 100 hours of storage would require 32,000 Tons of lithium. To put that amount in perspective, note that in 2018 the global production of lithium was 62,000 Tons.

In other words, about half the world’s lithium supply would go for backing up renewables to replace one coal plant!  Sure, we could expand the production of lithium, but how soon could we scale it up to get millions of tons per year to replace all the coal power? We do not have the luxury of time. As Greta Thunberg and children all over the world implore us, we must take action to combat climate change. Let's do right by them and not make the problem worse than it already is.

Time to get real and embrace nuclear power!

Links to some of recent videos

I confess I have not been very active in posting blogs lately. But please do not take that as a sign of waning interest in the subject. I have kept up giving lectures and appearing on Michael Killen’s TV show to talk about global energy and the necessity for the world to move towards nuclear power. In addition, my talks at the Thorium Energy Alliance conferences in 2016 and 2018 are also available on YouTube. Here are links to some of these videos:

1.     Michael and I discuss the assessments of the impact of climate change described in recent reports released by the IPCC and a collection of 15 US agencies. (December 2018).

2.     Alex Cannara and I talk with guest host Jonathan Kleid whether renewables alone can prevent climate and economic disaster. (January 2019):

3.     Michael and I talk about the Green New Deal and its ability to combat climate change. (April 2019): https://youtu.be/MptQO8pJ0E4
4.     My talk at the Thorium Energy Alliance Conference # 7, in Palo Alto where I introduce the notion of a cubic mile of oil and discusses the moral imperative for increasing total global energy supply equivalent to several cubic miles of oil. : https://youtu.be/CpXG3zyg3gk
5.     My talk at the Thorium Energy Alliance Conference # 8 on replacing the cubic miles of oil that we use and what will be needed in the future with nuclear power. https://youtu.be/sGphBAgoF_w