In my previous post I emphasized the need to focus on actions that could have a significant impact on greenhouse gas emissions.  I ended the post noting that shale gas, shale oil, and other unconventional resources can help us buy time to develop CO2-free sources of electricity.  It got me thinking about the relative amounts of CO2 emissions abated through the expanded use natural gas vis-à-vis the deployment of wind and solar technologies.  The recent Short Term Energy Outlook report by the Energy Information Agency provides an unequivocal answer:  substantially greater amount of CO2 emissions have been avoided by displacing coal with natural gas to generate electricity than by deploying wind and solar technologies.  Here are the numbers:
Between 2004 and 2011, the annual production of electricity in the US has stayed around 4,000 TWh (0.26 CMO).  Over this period the contribution of coal has dropped from 2,000 TWh to 1,500 TWh, while the contribution from natural gas has increased by 500 TWh (from 700 TWh to 1,200 TWh).  Nuclear- and hydro-power were largely flat over this period, and a decrease of about 100 TWh from oil is offset by an increase in wind and solar power. 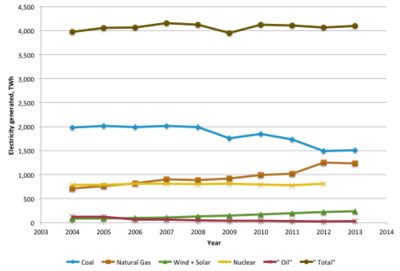 Figure 1.  Total electricity generation in the US has remained largely flat since 2004 with the most significant change being a swap of 500 TWh between coal and natural gas.
The CO2 footprint of electricity from natural gas is half that of coal, and so the amount of CO2 abated through expanded use of natural gas is equivalent to that emitted upon producing 250 TWh from coal, about 550 million metric tons.  Meanwhile, wind and solar power in the US increased from 20 TWh to 130 TWh.  Thus the amount of CO2 abated by fuel switching from coal to natural gas is about twice as much as that avoided by wind and solar generation.  And, that reduction was accomplished by market forces.  If our objective is to reduce greenhouse gas emissions, and it should be so, then in the short term we can achieve greater reductions by promoting fuel switching without having to decrease electrical power production, which would adversely affect the nations economic vitality.
It so happens that there are abundant resources of shale gas also in Europe, China, and many other regions.  IF they were developed globally, we could slow down the rise of ghg emissions without reducing the total electricity supply.  Of course, they have to be developed responsibly: with best practices to avoid contaminating water or causing other environmental damage.
Don’t get me wrong; I am not against developing wind or solar systems of power generation.  However, policy makers charged with reducing CO2 emissions have to also consider the impact of supporting commercial scale deployment of solar with feed-tariffs or renewable portfolio standards, and the attendant drag on economy, which inevitably pushes more people into poverty.
As I write this piece, India is suffering through a major electricity crisis: 600 million people lose power for hours on end. No light, factories idle, no air conditioning, no fans, no elevators, transportation snarled. Ouch!!
Posted by Ripu at 10:21 PM 3 comments: