Nuclear Power? Yes, but what about…?

The Intergovernmental Panel on Climate Change (IPCC) recently released its special report on climate change with a clarion call for immediate action to reduce greenhouse emissions.[i] That has been clear for a long time, and the dire consequences of climate change are now expected to be felt as soon as 2030. The urgency is mainly because as a society we have been late in taking action.

The world also needs lots of energy, particularly electricity, for the well-being of its citizens. Unfortunately, the one source of clean electricity, nuclear power, has been off the table for many in the “environmental” movement. Readers of this blog know that I am a strong proponent of nuclear power. In my last post, I pointed out three reasons for supporting nuclear power: near-zero carbon emissions, fewest fatalities per unit of electricity, and the smallest environmental footprint. This post deals with several of the what-about questions I am asked online or after my talks.

What about the waste?
One question that I get asked most often has to do with the issue of “waste.” So, let’s talk about it. First, spent nuclear fuel is not “waste,” it is a resource for future nuclear plants. Importantly, the spent fuel is a solid; totally contained inside a steel rod. It is not something that is released to the environment. Contrast that with coal-fired power plants that emit billions of tons of gases and particulates into the air and equally large quantities of solid wastes, which can end up in streams and waterways. 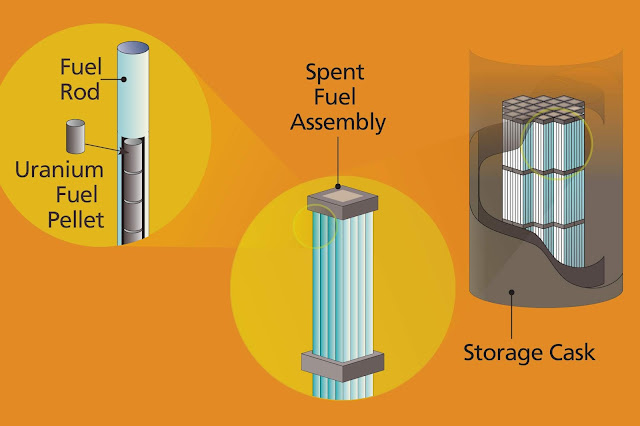 To begin with the nuclear fuel consists of ceramic pellets of uranium oxide enriched in U-235, the fissile isotope. The isotopic composition of the fuel pellets is about 4% U-235 and the remaining 96% is U-238. After two years in service, the fuel pellets still contain about a quarter of the U-235. Also present are the fission products and 2% Pu isotopes. Between the remaining U-235 and Pu isotopes, about 50% of the original fuel value is still in the rods when they are removed from service. Two main reasons for retrieving the rods are that after about 2 years in the reactor core some of the cladding materials develop cracks and defects, and accumulation of fission products like cesium, iodine, strontium and barium, interfere with the maintenance of neutron balance.

The fuel assemblies are then withdrawn and stored under water. About 20 feet of water is needed to cool the rods and provide adequate shielding from the radiation. After 10 years under water, the highly radioactive fission products in have decayed to a point that the rods may be stored on site in dry concrete casks with passive air cooling. The spent fuel may alternatively reprocessed to recover the fissile elements (uranium and plutonium), and fashioned into pellets as is the practice in several countries like France, Japan, Russia. Because reprocessing could lead to opportunities for siphoning off plutonium and thus to proliferation of nuclear weapons, this practice was stopped in the US in 1980s. I will discuss the issue of proliferation later in this post, but let’s continue with the discussion of “waste.” 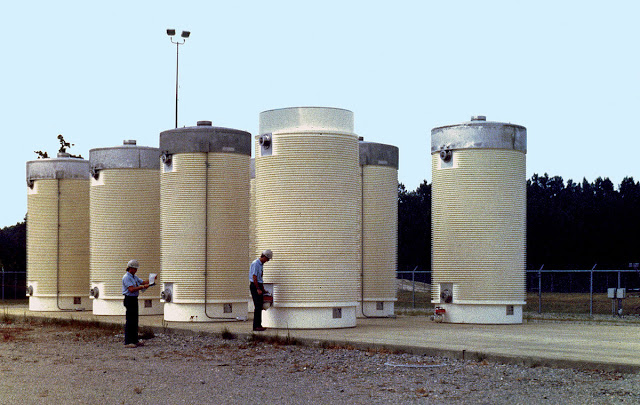 Second, the total amount of spent fuel is tiny. According to the International Atomic Energy Agency, the total amount of spent fuel produced by all the nuclear power plants over the last 70 years is 370,000 tons.[ii] About 120,000 tons of it has been reprocessed. The total volume of all the spent fuel is 22,000 cubic meters, which would fill one football field (100 yards by 55 yds) to a depth of 13 feet! It is a small amount of “waste,” considering all the carbon-free electricity these plants have generated.

Storing the spent fuel in deep geological wellbores is technically feasible. As demonstrated in Finland there are no technological barriers to deep well storage, although there remain political barriers. In the United States, Yucca Mountain in Nevada was proposed as a repository, but after years of back and forth, the plans were abandoned. No politically acceptable site has yet been identified. To get around the political deadlock, Deep Isolation—a California company, started by daughter and father Elizabeth and Richard Muller, is proposing a modular and inexpensive option. Their solution exploits recent advances in fracking technologies to drill mile-deep wells with tilted horizontal holes to store the spent near the nuclear plants.[iii] Until such time as this or some other innovation is developed, on-site storage of the spent fuel in dry casks remains a perfectly viable option.[iv] Besides, on-site storage would make it easy to retrieve fuel for future fast reactors.

What about fuel supply?
Another question I often face is that there isn’t enough uranium to power the expanded nuclear fleet. At the current rate of consumption (56,000 tU/yr), global supply of reasonably assured resources (RAR) of uranium at $80/tU could last about 40 years, but if the nuclear fleet were to be expanded substantially, these resources would not last very long. The thing to note is that apart from uranium RAR there is a much larger uranium resource base, which is accessible at higher price. Doubling the price of uranium ore from $80/ton to $160/ton would greatly increase the supply of uranium while raising the cost of electricity by only a fraction of a cent per kWh, because each ton of U produces 1.2 TWh of electricity. With more than adequate supplies in hand, current market conditions do not favor efforts to explore other sources of uranium, but with appropriate price signals these secondary sources could become part of the RAR.

Nuclear weapons are another significant source of uranium. Under the megatons-to-megawatts program, many nuclear warheads are being dismantled. The highly enriched uranium and plutonium of the warhead is diluted with depleted uranium to make mixed oxide (MOX) fuel suitable for nuclear power plants. Further, if we replace the current practice of using the fuel in a once-through mode by reprocessing waste fuel, the current supply of uranium could last several-fold longer. Finally, if we develop breeder technologies to use thorium the supply of fissile fuels would be virtually inexhaustible.

The reason why countries acquire nuclear weapons technology is largely geopolitical, and proliferation is best addressed through political solutions. Countries acquire them primarily as a deterrent against a more powerful neighbor. Other factors include national pride and exercise of hegemony. France was concerned about Soviet weapons in its neighborhood. It developed nuclear weapons despite protestations from the Kennedy administration. Even assurance of a nuclear umbrella from the US did not dissuade France from its path.

Uranium-based nuclear weapon has a relatively straightforward gun design that shoots one subcritical mass of uranium into another subcritical mass. Together the pieces exceed the critical threshold and a nuclear explosion ensues. However, getting the uranium fuel and enriching it to weapons grade (i.e., greater than 80% U-235) is a substantial challenge. Recall that natural uranium has only 0.7% U-235. Fuel grade uranium requires increasing the ore about 6 fold to between 3% and 5% U-235. Enriching it to weapons grade requires an additional 20-fold enrichment, something that requires access to a vast arrays of high speed centrifuges. Non-nuclear nations could not follow this path surreptitiously as these facilities would be readily detected and are also subject to sabotage through cyber-attacks—the U.S. successfully set Iran back in its drive to acquire weapons grade uranium by deploying the Stuxnet worm.

Plutonium-based devices require Pu-239, which is present in the spent nuclear fuel. Chemical extraction of plutonium is a relatively simpler process than enriching isotopes, and hence the fear that countries could divert some of the spent fuel for making a weapon. However, the construction of the plutonium device is much more challenging and presents a major hurdle.[v] Besides, the plutonium in spent fuel also contains other isotopes of plutonium, notably Pu-240, which must be removed, or the device would simply fizzle. Weapons-grade plutonium are best obtained from research reactors in which the uranium is “burnt” for very short periods before reprocessing—a practice not conducive to electrical power production.

What about dirty bombs?
Another concern is the possibility of nuclear waste being used by terrorists to create a “dirty bomb” which causes radioactive damage. The damage that a dirty bomb can really create is one of fear of contaminating a vital area so as to cause mass disruption. A dirty bomb will also cause a small increase of cancer risk for the population as a whole, but it does not lead to immediate loss of life. Terrorists are more likely to try something more spectacular, including conventional bombs.

The hurdles for making a dirty bomb are also significant for a terrorist organization. For starters, amassing the radioactive material without killing themselves before they can make the device is an insurmountable challenge for the terrorists. While the radiation from the dirty bomb after it has been exploded—and the radioactive materials dispersed—poses only a small risk to the large population, in a concentrated form, as would be necessary for the bomb, the radiation levels will be high enough to cause illness and death. The terrorists could decide to make dirty bomb from  alpha-emitters, because they can protect themselves against this non-penetrating radiation. For this type of dirty bombs the radioactive materials can be obtained from a variety of medical and other devices that have nothing to do with nuclear energy, and so this threat is not reduced by turning off nuclear power plants.

There will always be violent groups with grievances, and therefore the risk of having such a group acquire a small fissionable bomb can be minimized with adequate protection of important secrets and technology. The real risk would be from a rogue nation providing a terrorist group with a small nuclear device and a means for delivering it. A one-kiloton “suitcase” device does not wreak as much damage as many conventional explosive charges do.

I do not mean to take the threat of terrorist attacks using a nuclear device lightly, for it can cause mass economic disruption. Ours is not a situation with easy choices, and the growth of nuclear power is important for the energy security of the world. This is a problem that needs a political solution. Greater involvement of the IAEA and internationalization of the enrichment and fuel reprocessing is a path proposed by ElBaradei, former Director General of the IAEA and winner of 2005 Nobel Prize for peace. Internationalization of fuel processing could provide assurance to countries pursuing nuclear power that they will get the fuel for their plants. Stable energy supplies is a deterrent of war. This scenario also provides the safeguard that nuclear material is not being diverted to military uses, because the material would be watched over by personnel from many different countries.

[i] Summary for Policymakers of IPCC Special Report on Global Warming of 1.5°C approved by governments; Press release. Oct. 8, 2018; http://www.ipcc.ch/news_and_events/pr_181008_P48_spm.shtml
[ii] Status and Trends in Spent Fuel and Radioactive Waste Management, IAEA Nuclear Energy Series No. NW-T-1.14 (2018)
[iii] https://www.deepisolation.com/technology/
[iv] U.S. Nuclear Regulatory Commission: https://www.nrc.gov/reading-rm/doc-collections/fact-sheets/storage-spent-fuel.html
[v] In order to successfully explode a plutonium bomb it is important to keep the Pu-239 from poisoning itself by its own neutrons. To achieve this, plutonium is fashioned into a thin-walled sphere so that the neutrons mostly escape and are not absorbed by the neighboring Pu atoms. In order to explode the device, the Pu sphere has to be compressed together into one lump. This feat is achieved by a process of implosion. A number of chemical explosives are set off around the Pu sphere, and their shock wave compresses the sphere. The timing of the explosions has to be very precisely controlled, or the nuclear device simply fizzles.
Posted by Ripu at 3:49 PM 6 comments: