Why I Favor Nuclear Power


The world needs energy
There is little doubt that the world needs lots of energy—cubic miles of oil worth of energy—just to afford the current population a decent standard of living. More than 80% of the primary energy we currently use is derived from fossil fuels, and the immediate consequence is a higher concentration of CO2 in the atmosphere, ocean acidification, and an increased risk of climate change. The need for producing much more clean energy, in particular electricity, becomes evident when one considers the 3 billion people living at or near-poverty conditions.

Use of electricity produces no environmental pollutants, and thus its use should be encouraged wherever possible, such as for heating and transportation instead of using natural gas and oil. These transitions only increase the demand for clean electricity. As a rough estimate global production of electricity has to increase at least four-fold its current level of about 25,000 TWh per year. Of course, electricity is only as clean as the method for generating it in the first place.

As some deeply concerned about the state of our environment, I realize that we have to stop using fossil fuels as soon as possible, and start relying on zero-CO2 sources like nuclear, wind and solar. On a life cycle basis, all these sources produce only a few grams of CO2 per kWh of electricity compared to nearly a kilogram of CO2 per kWh for coal power plants.

Nuclear power produces CO2-free electricity
Unlike generation electricity by burning fossil fuels, generation by nuclear, hydro, solar, and wind are not associated with direct emissions of CO2. That is not to say that these sources are carbon-free. Varying amounts of CO2 are released in the processes used for producing the requisite materials, construction, and ultimate dismantling. Comparison of various electricity generation technologies must account for both direct and indirect emissions. The figure below was taken from a paper by Markandya and Wilkinson, which compares the direct and indirect emissions of CO2 for various power generation technologies.[1] On a life-cycle basis, CO2emissions from nuclear are the lowest, about 30 g/kWh compared to 1.3 kg/kWh for coal, and even lower than solar and wind because they require substantially greater amounts of materials such as steel, concrete, and glass for producing equivalent amount of electricity. 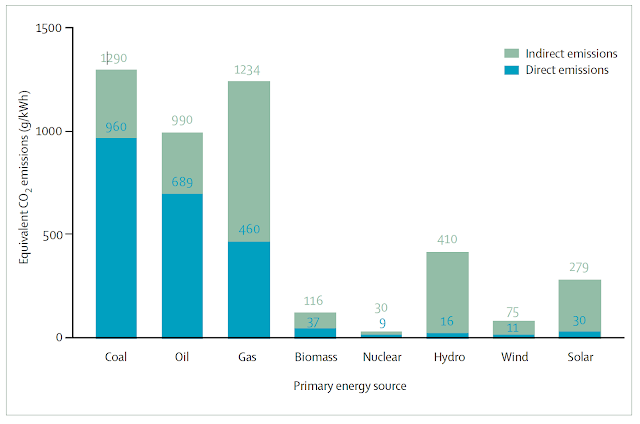 Nuclear power has a low environmental footprint
Since nuclear fission releases a million times the energy than chemical reactions (combustion), it takes that much less fuel. We burn billions of tons of coal, oil and gas, but to generate an equivalent amount of energy we need only a few thousand tons of uranium, which greatly reduces the environmental burden of mining for the fuel.

The high energy density means that nuclear plants are compact. They do not require much land and can be located close to centers of power consumers. The Diablo Canyon Nuclear Power Plant with its twin 1100 MW units take up only 940 acres (less than 1.5 square miles). Area required for comparable nameplate generation capacity for solar and wind farms is 10 to 100 times greater, and another three times larger to compensate for their low capacity factor. Because of the large area requirement, large renewable power generation systems have to located further away from city centers, and hence have a greater need for easements for  more transmission lines.

The tonnage of commodity materials such as concrete, steel, cement, and glass required for the construction of power generating facilities are also much smaller for a given capacity of nuclear power than other power generation systems, further reducing the environmental burden. Nuclear plants produce power 24 X 7 with occasional scheduled shutdowns for maintenance and refueling. They thus have capacity factors in excess of 90%. Renewable sources such as wind and solar have capacity factors between 25 and 30%. Whereas nuclear plants are built to last 60 or more years, wind and solar facilities last only 30 years. The higher capacity factor and longer life means that nuclear plants produce six times as much electricity as comparably sized wind and solar facilities. Figure 1, taken from the Department of Energy’s Quadrennial Technology Review, shows the tons of materials required for producing 1 TWh of electricity from different power generation systems. As is evident from the figure, the environmental burden of nuclear plants is the least of all other sources. 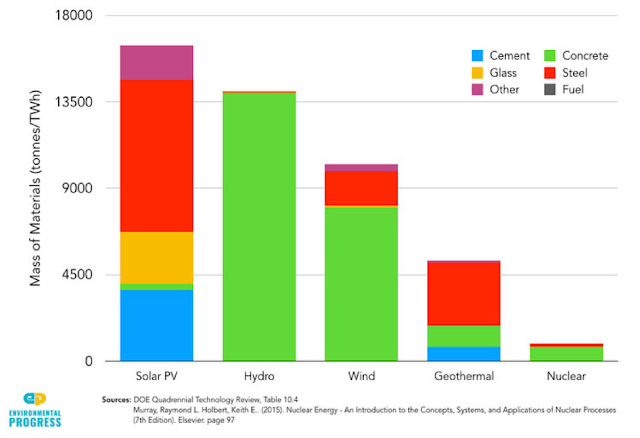 Nuclear power is safe
If we look at the fatalities associated with mining, installation, and operation from power generation of various energy sources, nuclear is the safest. The following chart, compiled by the Canadian Nuclear Agency includes deaths from the pollutants emitted by fossil fuels that cause asthma and other respiratory ailments.1 The figure of 161 deaths per TWh for coal is a global average, and it is worth noting that in the US it is 15, while in China it is 278. There is no doubt that measures to control the emissions of particulate matter and other pollutants from coal plants in the US have been very beneficial.

The figure of 0.04 deaths per TWh for nuclear plants includes the estimated 4000 deaths from radiation exposure following the Chernobyl nuclear disaster. This estimate is an upper limit for the number of fatalities as it is based on the linear no-threshold model (LNT). This model assumes all ionizing radiation is harmful, and its effects are cumulative; in other words the model assumes that our bodies have no repair mechanisms. We live with constant exposure to ionizing radiation and have evolved DNA-repair mechanisms to deal with certain levels of radiation exposure. A more realistic estimate would further reduce the number of fatalities from nuclear power to about 0.013 per TWh. 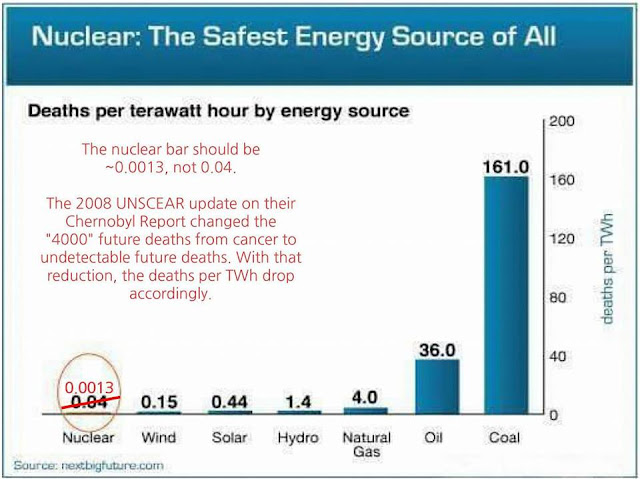 Figure 3. Nuclear power has the fewest fatalities per unit of electricity.

The prospect of climate change and ocean acidification are real, and the long time it takes to implement corrective measures means that we must rapidly decarbonize our energy systems. Our fears of radiation are largely unfounded and have had the deleterious effect of continued use of fossil fuels. Even as we deploy wind and solar—the nominally low-carbon sources—the absence of large scale storage systems have forced us into using natural gas power for back up. The design of natural gas power plants used as spinning reserves are selected on the rapidity with which they can be brought online. These designs are among the least efficient of gas-fired plants, with thermal efficiencies around 33%, and thus high carbon emissions. Gas-fired power plants that operate with a combined steam cycle have thermal efficiencies in excess of 50%. Analysis by Larsen and Rez shows that we would do better in terms of carbon emissions if instead of installing low capacity factor wind or solar systems and backing them with natural gas, we simply used a combined cycle natural gas plant.[2]