In my last post I wrote about the erroneous conclusions one can arrive at by conflating greenhouse gas emissions reported as tons of carbon with those reporting tons of carbon dioxide. There is a factor of 3.7 lurking in there! It is unfortunate, but different agencies report ghg emissions in one or the other convention. Those of us engaged in analyzing their implications just have to be very careful.

I would have thought that the Union of Concerned Scientists (Full disclosure:  I am a member) would not mix these up. To my chagrin, last week I ran across a report on the UCS website with precisely that mistake. The report uses the following infographic attributed to Information is Beautiful:1 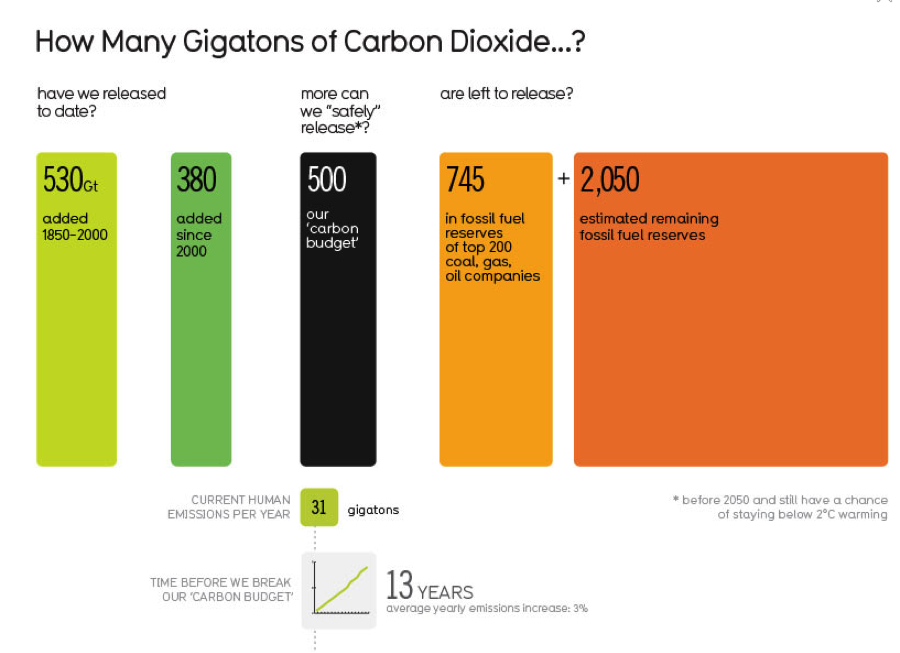 Notice that the figure to the gigatons of carbon dioxide, but then uses the numbers corresponding to gigatons carbon in the colored rectangles. As I pointed out in my previous post CO2 emissions between 1960 and 2000 already exceed a trillion tons, and the 530 Gt figure in the olive green rectangle for emissions between 1850 and 2000 makes sense only if it refers to the weight of carbon only. The figure then switches to using gigatons of carbon dioxide in the dark green rectangle (380 Gt CO2 does correspond to the amount emitted from the use of coal, oil, and natural gas between 2000 and 2012).  It switches back to gigatons of carbon in the black rectangle for “our carbon budget.”

In the lower portion the diagram shows an olive green square with 31 gigatons for current human emissions per year.  This number does correspond to the total weight of carbon dioxide emitted from fossil sources in 2009. If all that is not problematic enough, the inforgaphic goes on to calculate the “time before we break the budget.” It does that by dividing the total budget of 500 Gt C by the current emission rate of 31 Gt of CO2. After allowing for a 3% escalation factor, the time remaining is extremely short, just 13 years. Had they used the same convention for the numerator and denominator the result would not be 13 years but somewhat longer.  If we assume that global ghg emissions continue rising unabated at 3%/year, the cumulative emissions would break the budget 35 years.  Still a relatively short time but perhaps not as ominous, because it gives us a fighting chance to implement measures to curtail ghg emissions.
_____________________________
1 When I clicked on the link to the infographic on the ucs website it took me to the original on informationisbeautiful.net.  I noticed that the figure there has been updated. It lists 1565 GtCO2 as the amount emitted between 1850 and 2000 and 405 GtCO2 as the amount emitted since 2000. The remaining budget though is only 860 GtCO2.  I do not know the source of that number.