A Misleading Ad from ExxonMobil

Today’s NY Times carried an ad from ExxonMobil that perpetuates a myth about US energy independence.  The ad featured appears on two pages.  On the first it asks where the US gets most of its energy, and answers it two pages down, from the US itself.  It says, “New technologies have unlocked abundant resources right here.”  The statement falsely gives the impression that were it not for the new technologies, most of the US energy would have come from foreign sources.
The US has always obtained most of its energy from domestic sources of coal, oil, and natural gas, and to a less extent from nuclear and hydropower.  The US used to be a net exporter of energy, but since the early 1990s it has been a net importer.  The energy imports increased through 2005 to 32% of the total energy consumption.  Since then, energy imports have been on a steady decline such that in 2012 the US imports amounted to 20% of the consumption.  In absolute terms, the US imports decreased from 0.19 cmo in 2005 to 0.11 cmo in 2012.
The tight gas and tight oil resources unlocked by the new technologies like horizontal drilling and hydraulic fracturing have brought about the reversal in the trend, and their impact has been more pronounced on the oil imports. The US oil imports were at their highest at 13.5 million barrels per day (mbpd) in 2005, but in 2012 oil imports were down to 9.7 mbpd.  (See my previous post of Oct. 15, 2013 for charts and other numbers.)
Posted by Ripu at 3:42 PM No comments:


BP published its 2013 Statistical Review of World Energy a couple of months ago, and it is worth looking at how the global energy scene has changed since the publication of A Cubic Mile of Oil.  Since BP does not provide numbers for biomass use, I will assume it hasn’t changed from last year’s and look at the changes in the other sources of energy (see my comments on the post of March 10, 2013).

Global Energy Pattern
Marked increases in the installed capacity for wind and solar (PV) power occurred between 2006 and 2012; 2006 being the year whose data formed the basis for the analysis in the book.  Installed capacity for wind power capacity increased four-fold from 74 GW to 284 GW, and that for PV increased from 6.9 GW to 100 GW, a 14-fold increase. The total contribution of energy generated from wind and solar has risen 2.5-fold since 2006.  That is good progress towards weaning us from the reliance on our inherited sources (fossil and nuclear) to income sources, but it is also sobering.  In absolute terms the contribution of wind and solar increased from 0.02 CMO in 2006 to 0.05 CMO in 2012.  Meanwhile, coal usage increased to almost 1 CMO, registering 0.99 CMO in 2012, and oil use increased to 1.09 CMO.  Gas use increased to 0.79 CMO.  Nuclear power declined another notch to 0.12 CMO.  Here is the pie chart showing the contribution from various sources in 2012. 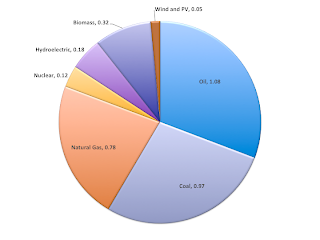 It does not look all that different from the one from last year, or for that matter from 2006.  That just goes to show that changes in the energy industry don’t happen overnight; they take decades.
US Oil production
A major energy story has been the rise in the US oil and gas production.  In the March 10 blog I noted that the recent IEA prediction (IEA World Energy Outlook, Nov 2012) of US oil production surpassing that of Saudi Arabia by 2017 seemed extremely optimistic. US oil production in 2012 increased by another million barrels per day (bpd) reaching almost 9 million bpd, but the Saudi production also increased by about half a million bpd.  Whether or not the US production exceeds that of Saudi Arabia depends not only on US production capability, but also global demand and the response of other countries including Saudi Arabia. 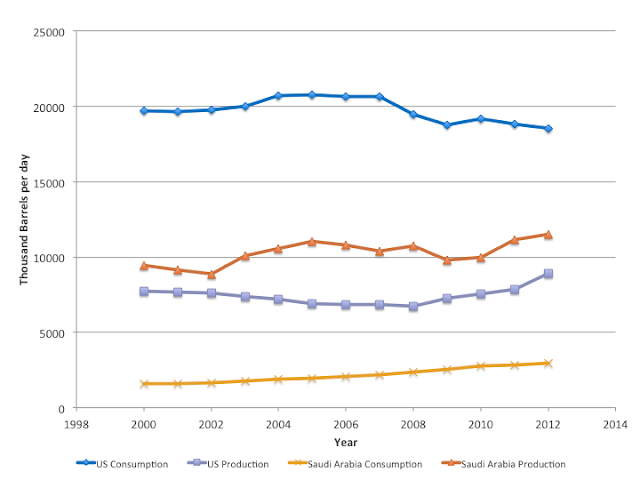 US Energy Independence
Another item much heralded in the media is the US march towards energy independence. Media reports often give the impression that the US has historically imported a large fraction of its energy, and now it is poised to be an energy supplier.  No doubt that increased oil and gas production coupled with increasing fuel efficiency have reduced domestic consumption, and reduced the demand for energy imports.  But again, let’s be quantitative and take a look at the historic data.
In 2000 the US energy deficit was 0.17 cmo.  Since then, the deficit first increased to 0.19 cmo in 2005 and is now down to 0.11 cmo.  In percentages, the deficit amounted to 28% in 2000, 32% in 2005, and in 2012 it was 20%. 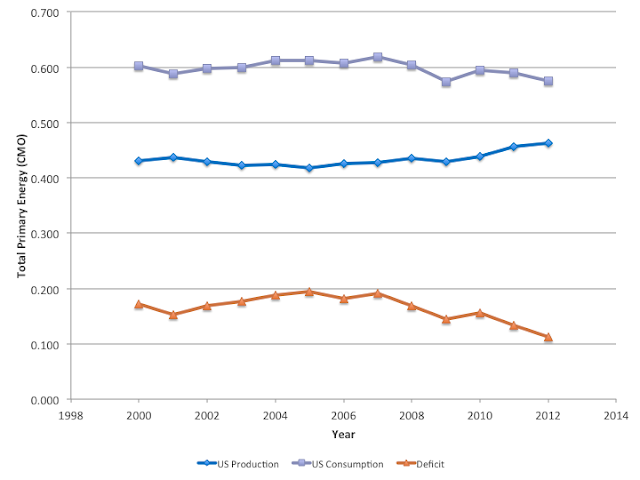 As I wrote in the book, A Cubic Mile of Oil, I think the focus on energy independence is misplaced. We should worry about energy security, which means making sure we have good and healthy relations based on strength and mutual respect with our trading partners.  The foundation for that comes from, to use the words of ambassador Richard Haass, getting our internal affairs in order.  Haass makes a strong case for that in his latest book “Foreign Policy Begins at Home.”  Those words ring especially true in view of the current state of dysfunction in our government.
Posted by Ripu at 6:35 PM No comments:

The shale phenomenon: fabulous miracle with a fatal flaw

A friend recently pointed out this article by Randy Udall In The Christian Science Monitor (Feb. 22, 2013). It provides further support for my position that shale gas and oil that I expressed in a post last April:  the developments are fine, but one should keep them in perspective. Bakken is no Ghawar.