In public lectures that I give about global energy, I often note that since the writing of A Cubic Mile of Oil the global reserves of oil have increased, not decreased, despite the fact that in the intervening time (i.e., between 2007 and 2013) the world has consumed about 7.5 cmo. In this post I want to dig deeper and look at the changes that have brought about this paradox, and what it means for Peak Oil.

As I explain in the book, reserves have a special meaning refer to those geologic accumulations that can be economically extracted with the current technology. With the development of technology and/or changes in the price of oil, geologic accumulations that were once only part of the larger resource base may get transferred to the reserves. Focusing only on the reserves is apt to give a wrong impression about the total availability of oil. The chart below shows the historic data for the World Proved Reserves (blue line) from the 2014 edition of the BP Statistical Review of Global Energy (BP2014) .  Using the right ordinate I have also plotted the Reserves to Production rate (R/P) ratio (brown line). This ratio has the units of years, and it has often been mistakenly interpreted as the years to exhaustion. 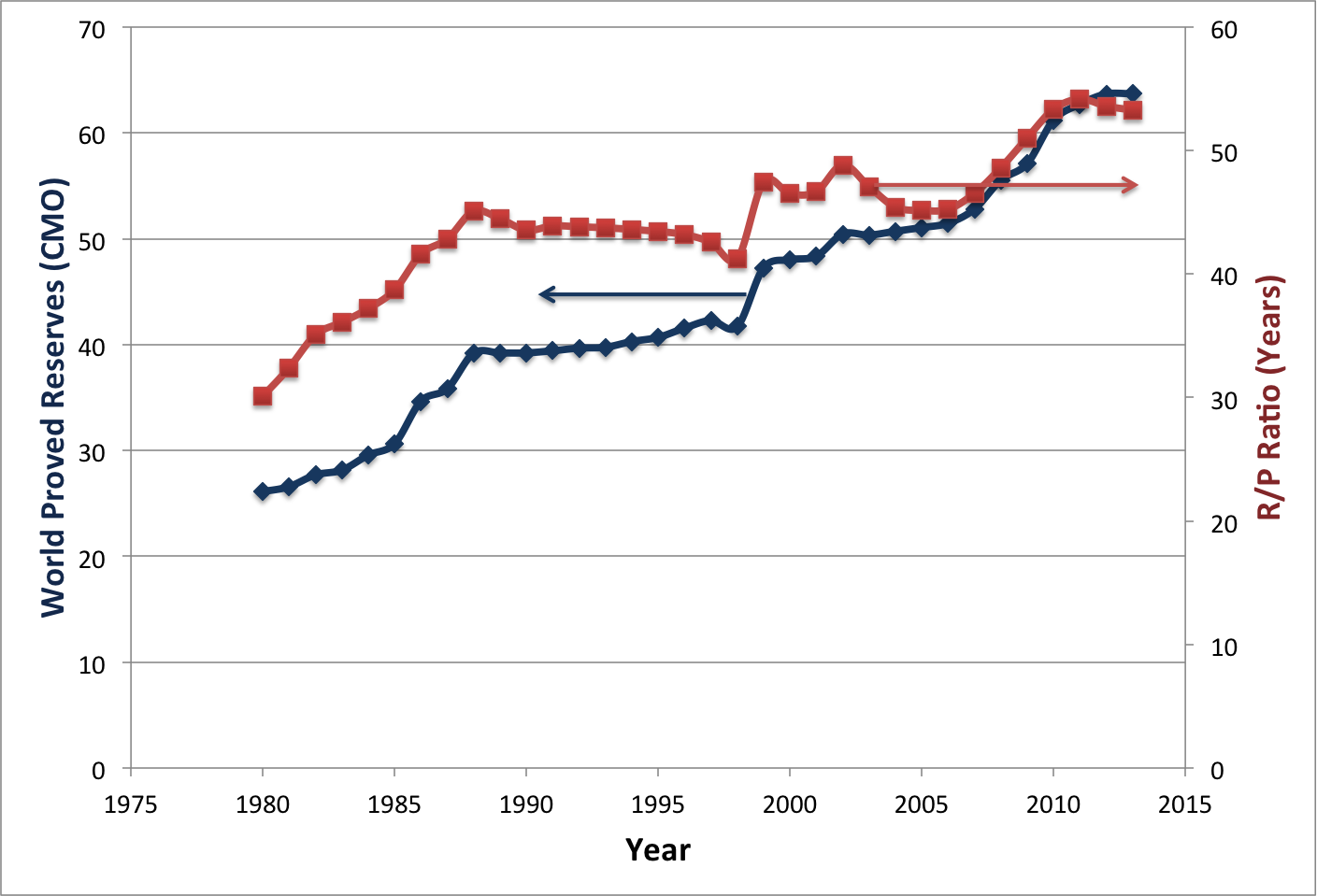 Likewise, current price of oil largely reflects the immediate surplus or shortage of supplies, and reflects more on the conditions above ground (in the supply chain) than on the geologic endowment of the resource.
That said; let’s begin by taking stock of how the world reserves of oil have changed in the last seven years. According to BP2007 world reserves of petroleum in 2006 stood at 1,208 billion barrels (45.6 cmo), and that’s the number I used in the book. The BP2014 edition lists the 2006 reserves at 1,364 billion barrels (51.5 cmo), and the 2013 reserves at 1,688 billion barrels (63.7 cmo). The upward revision of 156 billion barrels for the 2006 reserves resulted largely from reclassifying about 160 billion barrels of Canadian tar sands from the category of unconventional resource to the reserves pool. Although production of synthetic crude from tar sands had already begun to be commercialized, BP did not include them in the World Total of oil reserves until 2009. To a large extent the reclassification was aided by the maturing of the technology, and also by the rise in the price of oil. In 2006 oil was selling at around $40/ barrel, and that price was barely enough to make Tar sands operations economical. By 2009 had already spiked to above $140/barrel; since 2010 it has been hovering around $95±10/barrel. Smaller upward revisions were also made to the reserves of Venezuela and the Russian Federation, while there was a downward revision of the Kazakhstan reserves (ca. 30 billion barrel).

The recent news of abundant oil supplies has once again called into question the Peak Oil theory. Writing for the Wall Street Journal, Russell Gold recently provided a nice perspective on why peak oil predictions have not come true. I agree with him on most points, but would quibble with him on the role of technology. He ascribes the increased production to the advent of hydraulic fracturing and horizontal drilling, and places faith in technology to provide developments that will unlock further resources of oil. Perhaps just as important to consider is the price change, which responds more to the global demand for the commodity than anything else. Producing shale oil is not inexpensive; the cost can be upwards of $60/barrel. As mentioned above, prior to 2008 the oil price hovered around $40/barrel, and after some spikes it has been above $80/barrel since mid 2009; evidently the global market seems to be willing to pay this high price to support production of expensive oil.

Distinct from geologic and economic limits, which have dominated the Peak Oil debate, is the energy limit. I am referring to the energy return on (energy) invested, or EROI. It takes energy to extract oil, and easy oil—the kind that gushes out of wells can have an EROI values around 100, meaning that for each barrel of oil energy invested, the well produces 100 barrels of oil. Current global average of producing conventional oil has EROI of 20, while the more difficult to extract Alberta tar sands and shale oil have EROI between 5 and 7.

While it is true that oil may still be extractable at higher prices, oil ceases to be a source of energy when the energy required in recovering it exceeds what it can deliver. Now, there still maybe an economic incentive for continuing to produce a fuel from sources with EROI of less than 1 as long as the product fuel provides sufficient value—corn-derived ethanol is a prime example of that. I should note that I was incorrect in the book to say that once the EROI is less than 1, “there will no longer be an incentive to extract it regardless of price.” I should have said that oil ceases to be a contributor to global energy supply when its EROI drops below 1.

My Talk at UUCPA

This afternoon I was invited by the Unitarian Universalist Church in Palo Alto to give a talk on global energy based on A Cubic Mile of Oil. It was great to see many familiar faces and I thoroughly enjoyed the discussion following the presentation. The slides I showed and many more that I held in reserve are available here.

During the Q&A I was asked how CO2 emissions from electric cars compare with those from a gasoline-powered car if one takes into account emissions associated with electricity production. I responded by saying that in general CO2 emissions from electric vehicles are lower than those from gasoline-powered cars, but it really depends on the specifics—particularly on the location because grid emissions per kWh vary considerable across the country depending on the fuel mix used to produce the electricity. Here is a link to a NY Times article that I mentioned during the talk. It shows the required fuel efficiency of a car to have emissions equivalent to a Nissan Leaf that is charged in different parts of the country.  As the graphic illustrates, in many parts the country the required fuel efficiency is in excess of 50 mpg, which is higher than the fuel efficiency of even hybrid cars, but in much of central USA, where a larger percentage of electricity is produced from coal, the required efficiency of 35 mpg is easily surpassed by many fuel efficient cars.