Carbon or Carbon dioxide? It matters!

Greenhouse gas (ghg) emissions are often reported as tons of carbon dioxide (CO2) equivalent.  This terminology takes into account greenhouse gases like methane, nitrous oxide, and chlorofluorocarbons which may be emitted in smaller amounts, but because of their higher global warming potential can nonetheless make a significant contribution to the total anthropogenic global warming gas emissions. The US EPA recently published a draft report on the inventory of the US ghg emissions, and the report can be downloaded from here. Below is a figure from the Executive Summary that shows the trend in emissions of the main ghg gases since 1990, and it reports the emissions in the units of tera grams (Tg) of CO2 equivalents.

Burning of fossil fuels, which produces CO2, is the largest component.  The drop in CO2 emissions in the last few years is notable, nevertheless it still amounts to roughly 5,000 Tg, which is the same as 5 gigatons.  Incidentally, global emissions of CO2 from the use of fossil fuels in 2012 were 35 gigatons.
On Feb. 13, Inside Climate News published a story on coal utilization in China on.  It contained the following attention-grabbing graphic. 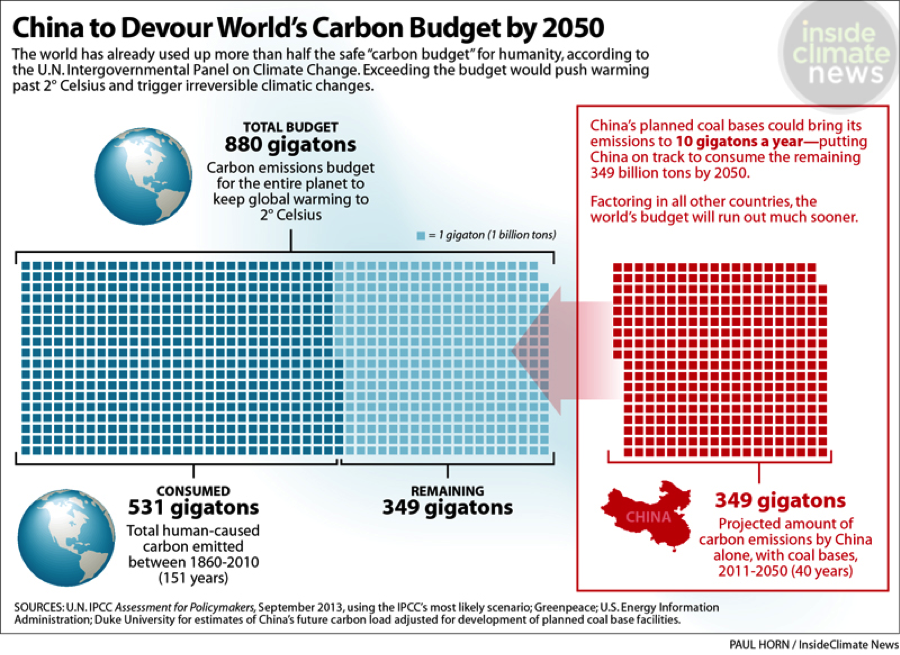 The graphic reinforces the meme, “If only China would stop burning so much coal, we’d be fine.” Two important questions that this graph (nor the accompanying article) address are: (1) How many gigatons of carbon are the US and the OECD countries slated to emit during the same period? And (2) How many of the 531 gigatons of carbon already emitted were contributions of the US and the OECD countries.

Wait a minute, does the graphic say that the world has emitted only 531 billion tons since 1860?  I added up CO2 emissions since 1965 as reported in the BP Statistical Review of World Energy, 2013, and they totaled to over a trillion tons.  Now, the graphic does say carbon emissions. Perhaps it is counting only the weight of the carbon in the carbon dioxide emitted.  I can agree that under such a convention global emissions of carbon in the 150 years from 1860 to 2010 could amount to 531 billion tons.  If so, I have serious problems with the suggestion that China is slated to emit 349 billion tons of carbon in the next 40 years?  It doesn't seem very plausible.  CO2 emissions from China in 2012 were 9.8 gigatons or 2.5 gigatons of carbon.  Even a tripling of carbon emissions over the next 40 years would bring the estimate to about 200 billion tons of carbon.  However, if ICN switched to counting the full weight of carbon dioxide, the projected 349 billion tons number could make sense, but using different conventions in the same graphic would constitute a gross deception.
By the way, over the next 40 years, the OECD countries are also estimated to emit 151 billion tons of carbon (i.e, 556 billion tons of CO2)!  Between 1965 and 2010, CO2 emissions from OECD countries, which comprise 18% of world's population, amounted to 153 billion tons of carbon, and I estimate that their contribution to the stated 531 gigatons since 1860 is about 300 billion tons.
The ICN article also highlights the air pollution caused by coal power plants and the respiratory ailments and premature deaths it causes. Unfortunately, coal will continue to be a major source of energy, and we need to burn it as cleanly as possible. Technology for producing electric power without emitting particulates and toxic gases from coal exists, and—unlike carbon capture and storage (CCS)—is not prohibitively expensive. In the US we are breathing easier, thanks to the Clean Air Act and the technical innovations it engendered for capturing the toxic emissions. People often bring up premature deaths in China caused by air pollution from coal burning as an argument against using coal; they do not cite the reduction in poverty levels enabled by the use of coal, nor the concomitant reduction in infant mortality.  Since scaling renewable sources like wind and solar or coal-power with CCS to a level that can have a meaningful impact is going to take many decades, we need to rely in the meantime on sources that can substantially reduce CO2 emissions such as natural gas and nuclear.