Rise of Renewables in Germany

The release of the report Better Growth, Better Climate last week and the People’s Climate March just before the UN Climate Summit this week has focused much public attention on the climate change crisis. The report by the Global Commission on Economy and Climate chaired by the former President of Mexico, Felipe Calderon, and co-chaired the notable economist, Nicholas Stern, provides support to the notion that the actions to mitigate climate change are not expensive and will not even hurt the economy. Many commentators have used this report to buttress their calls for strong action to curb greenhouse gas (ghg) emissions by turning off fossil fuel power generation, stop subsidizing fossil fuels, and using the revenues in alternate ways to help develop clean energy sources and grow the economy.

Writing in the NY Times, Mark Bittman, argues for developing small, decentralized, clean energy sources instead of projects like the Tar Sands and fracking. To further support this approach he refers to Naomi Klein’s book, This Changes Everything, showing Germany’s success in transforming its energy system, "Klein cites the example of Germany, which reached a goal of making about 25 percent of its energy clean and renewable within 15 years..." For the world’s 4th largest economy to get 25% of its energy from renewable sources would be truly remarkable. Unfortunately, Klein, Bittman, and others have conflated energy with electricity. While Germany now derives 25% of its electricity from renewable resources, these sources amount to only 9% of the total energy consumption.

Through the policy of Energiewende, Germany has made huge progress in installing renewable energy systems like wind and solar. Since 2005, the installed capacity of wind power has nearly doubled, from 18 GW to 34 GW. Solar power has had an even more spectacular rise, from 2 GW to 35 GW. While this is commendable, it also shows how hard it has been to get to the 10% mark in 15 years.

It is instructive to look at the numbers. The 2014 BP Statistical Review of World Energy lists energy use in various countries by the sources. The total energy use in Germany was 325 million tonnes of oil equivalent (MTOE). The contributions of different sources in MTOE units are as follows:

In converting the energy from sources that produce electricity directly, the BP compilation does not use just the energy equivalence (1 MTOE = 12 MWh), but allows for inefficiencies of thermal power sources and uses 4.43 MWh as the equivalent of one MTOE.

The International Energy Agency (IEA) also compiles data for various . Its data for Germany summarized in this one-page overview also confirms that renewable resources make up 11% of Germany’s primary energy consumption, and about 25% of its electricity production. Before we get too excited and attribute the 25% electricity to the rise of wind and solar installations, lets take a look at the breakdown provided by the IEA. About of half the renewable electricity comes from biofuels and waste (9%) and hydroelectric (3%); the remaining 14% are from wind (9%) and solar (5%). 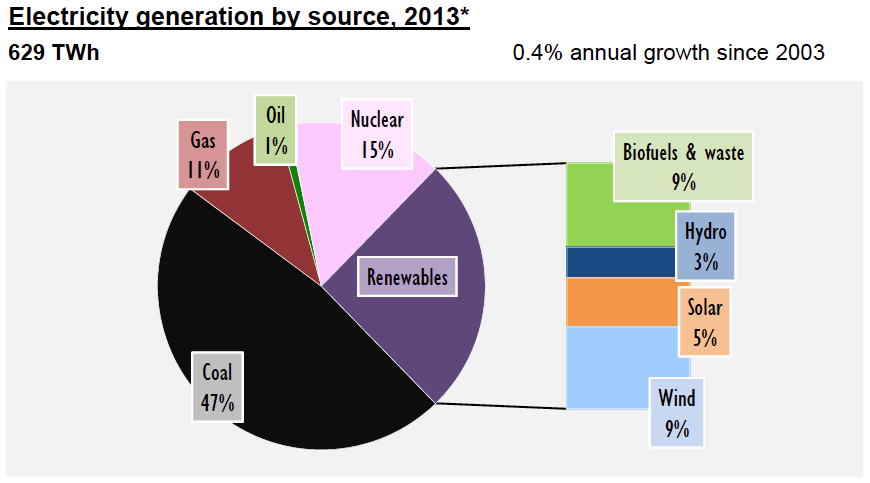 The challenge of providing cubic miles of oil worth of affordable energy so people can lead healthy productive lives while curtailing greenhouse gas emissions to levels that make an impact remains wickedly tough. Cheer leading alone will not get us there; commitment and persistence are the watchwords.